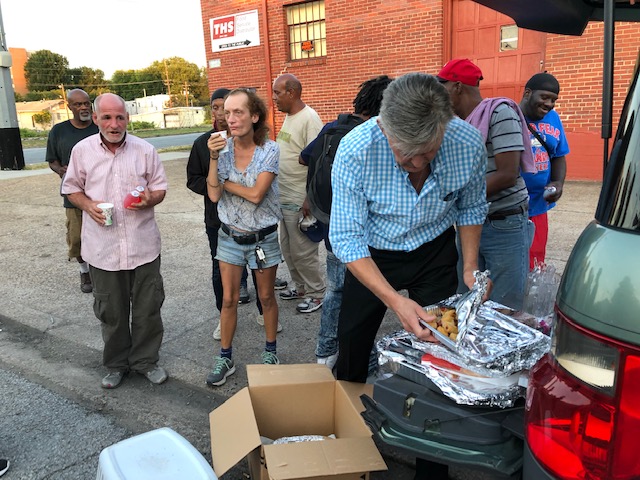 I’m sitting on the sidelines of a meeting at St. Elmo United Methodist Church, talking to a church member. I should be paying closer attention to the meeting, but this guy is fascinating.

Mike Rice is telling me how he put out this beautiful spread of refreshments for what could have been an ordinary church snack. He’s sharing some of his catering tricks and recipes for “Crunchy Coleslaw” and “Apricot Cheese Dip.”

I’m giddy for this impromptu chance to learn from a pro. I’ve already volunteered to work for him for free.

Then, I ask Mike about what he’ll do with all the leftovers. His answer snaps my journalist’s cap back on my head.

“I literally set it on the street for the people who live outside Chattanooga Community Kitchen,” he says, mentioning a local shelter. “It’s so sad. Some of them are so hungry, so thirsty. This summer, I took them leftovers every night after Vacation Bible School. One night I took 100 peanut-butter-and-jelly sandwiches.”

“They’re homeless? You take church leftovers to the homeless?” I ask.

Mike says yes, and explains how he buys cases of juice drinks so he’ll always have portable beverages ready when leftovers become available to take to the streets.

I ask if I can go with him when he gives out the leftovers tonight … and that is how Mike Rice showed me a blessing.

When the church meeting is over at St. Elmo, Mike packs up all the leftover food in the back of his green car, which he says the street people have come to recognize. He says he always asks them to pray over the food with him before they eat.

My husband and I follow Mike’s car downtown for several blocks into the city. He finally stops on 11th Street, where there are several people lying in doorways and on the sidewalk. It’s still about 90 degrees at 7:30 p.m.

Mike jumps out of his car and strides up to a man who is standing and seems more alert than the others. “Hey, he’s got food!” the man shouts out to the street, as Mike hurries to the back of his car.

Mike works quickly as a crowd materializes and curves around him. He doesn’t seem nervous or uncomfortable, just determined to get the food out before the crowd becomes overwhelming.

Mike sets out pans of pizza rolls, pigs in a blanket, cocktail sandwiches, baked beans, slaw, and cookies. The drinks are all gone in a flash.

The people fill their plates but they don’t linger or wait around for seconds. The crowd dissipates quickly, and Mike fills a laundry basket with what’s left and hands it to the man who moments ago announced his arrival.

The man promises to share the food widely, and then he is gone.

Mike explains he also buys cheap laundry baskets and saves them for this occasion. He says he always picks out someone who looks like a leader to help him accomplish this street buffet.

“I’ll feel better tonight, just knowing they’ll go to sleep with something in their stomachs,” he says.

After a hug, Mike gets in his car and he is gone, too.