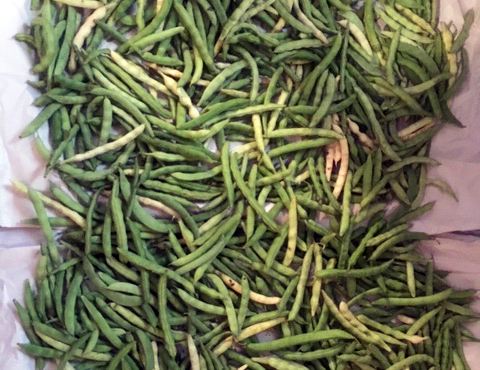 On Tuesday, July 9, Mike and I went to Henderson Settlement to celebrate our anniversary. It’s a United Methodist mission in Frakes, Kentucky. We were married there!

The next morning, I was in a hurry to get up and make the two-hour trip back to my office in Alcoa, Tennessee. My boss, Tim, had scheduled a meeting for us to plan The Call‘s part in a brand-new Holston Conference website.

Before we left Frakes, Mike and I went by the Henderson Settlement greenhouses to see our friend and staff member Casey Smith.

After she teased me for not being dressed for greenhouse work, Casey held up a half-bushel of white half-runner beans and said, “I picked these for your next Dinner Party.”

Well, I was in a hurry. And I didn’t know if I had time to worry about storing and cooking the beans before our next Second Sunday Dinner Party at Norwood United Methodist Church, which happens to be a cookout this Sunday, July 14, at 7 p.m.

What I did know was that Casey woke before sunrise to pick those beans for us on what was already a blistering hot day at 9 a.m. So there was no way I was going to turn those beans down.

Plus, they were so beautiful and fresh-picked. What a gift to share with our Second Sunday guests!

I called Marci as soon as I got within cell-phone range. “Do you have time — and do you know how — to cook half a bushel of white half-runner green beans between now and Sunday?”

Well, as always, Marci came to the rescue.

The beans are now safely in Marci’s possession, and you can look forward to a recipe and a report on how they were received at our next Dinner Party!

One thought on “Green beans are coming”